Opera in one act by Valentin Ruckebier, libretto by Hermann Schneider

on his opera The flight to Egypt

Opera is a genre that has always fascinated me: not only due to the connection of sound and image, which opens up plenty of possibilities to express, but also because singing is the most physical way of making music. In my compositions, I try to make this physicality accessible to the listeners, thus, to carry them into an emotional otherness. Art is like small electricity shocks, which wake you up from the numbing routine of daily life and thereby facilitates the awareness of oneself and the world. Music of high intensity leads to strong emotional experience; since art happens at borders.  Hermann Schneider’s Libretto of The Flight to Egypt deals with an archetypical experience: based on the apocryphal infancy gospels, it depicts the story of a small family from a foreign country that tells hospital doctors about their escape. It turns out that their experiences reach the limits of the tangible and explainable.

The music subtly emphasizes the juxtaposition of two worlds: While the doctor’s team starts asking questions with confidence, singing with full voice, the stories of the mother and the father sound much softer and more insecure. This insecurity is expressed through the use of experimental singing techniques such as quartertonality, glissandi and falsetto. This juxtaposition is further underlined by the mélange of western classical music with a contrasting arabic tone colour.  The role of the child has important place in the soundweaving of the opera: its unique individuality is reflected by highly expressive, avant-garde sounds which explore the limits of the human voice.  Moreover, the music’s structure depicts the development of the doctors’ mental condition, as they listen to the family’s tales: The more “spellbound” they become by the supernatural oddity of the child, the broader their sound spectrum gets – the child’s singing techniques and the tonal material of the parents slowly transmit to the doctors. The initial classical singing transforms into a cacophony of yelling, whispering, breathing, humming and whistling.

The family’s and doctors’ fear of the unknown, but also their discovery in the end of the piece, are fundamental human emotions. Hence, The Flight to Egypt is a story, which deals with both social and individual issues, and is therefore timeless, universal and unlimited. 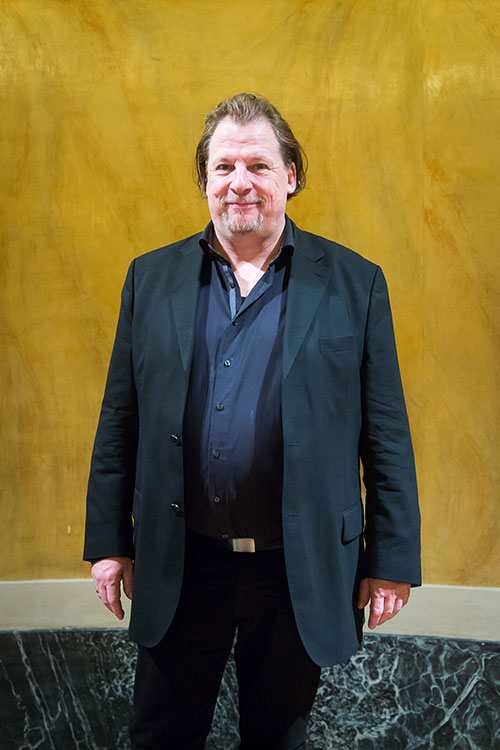 Writing a libretto for an opera is something completely different from writing a drama. Since you always have to create a text (a plot, a situation, words) which have to cause music. That means: without music, your written words do not make sense, at least not in any case. I always compare this with an experiment in physics; you have a solenoid and you bring it in contact with iron filings. If you then take away the solenoid, some of these filings remain in a certain order of the unseen magnetic field. These filings are the words you write or construct under the imagination of the upcoming magnetic field of music.

The flight to Egypt tells a story of miracles, which can be found in several sources about the life of Jesus Christ. He and his family are victims of the government and fear to be killed by soldiers. At night they flee. When this took place, Jesus was only three years old. During this flight several miracles happened. I interpret them as traumas or their compensation in the unconsciousness of the threatened child. This has definitely to do with our subject „fear and otherness“.